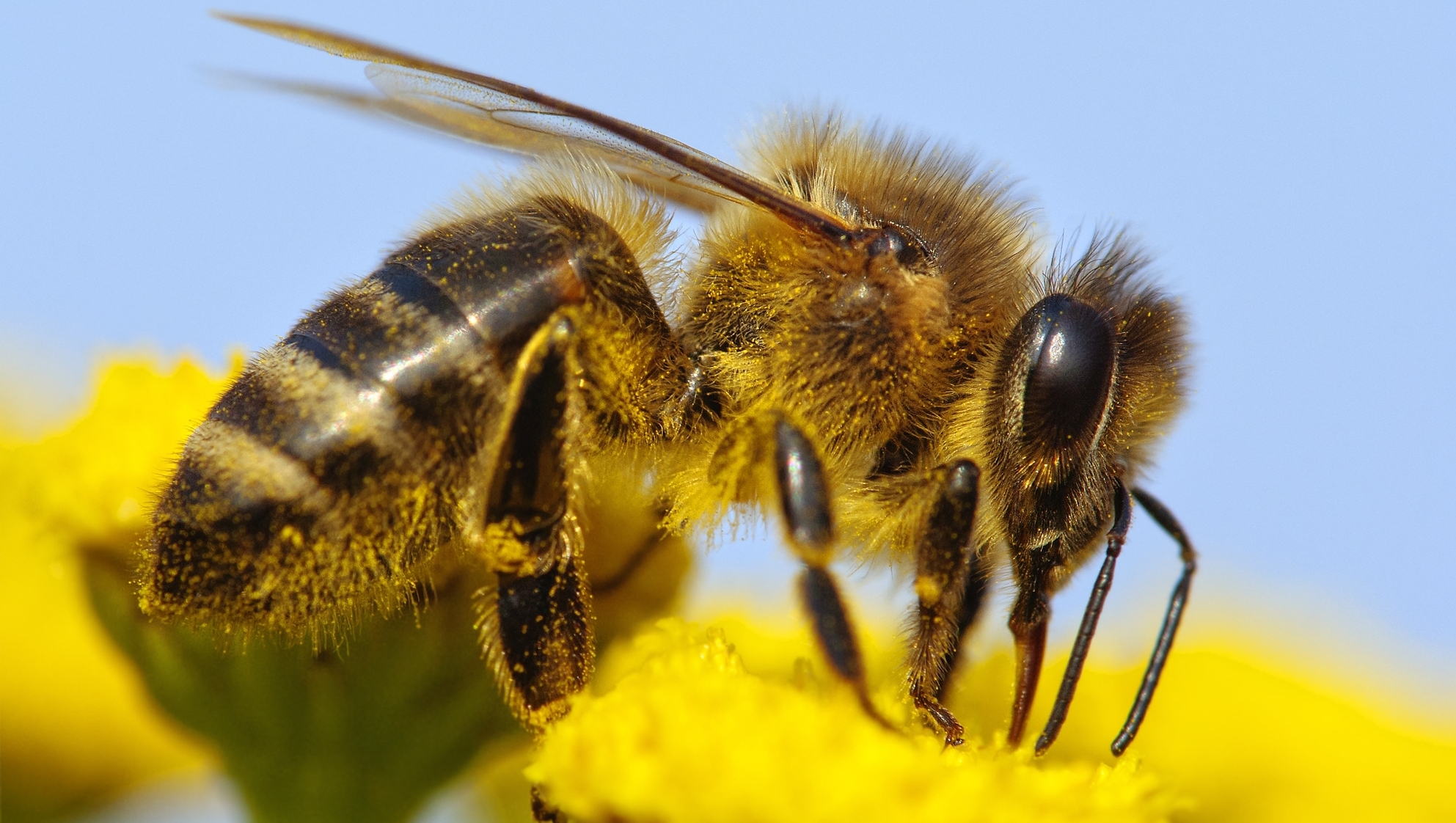 Chair of the “Apiculture and Bee Health” working group of the EP Intergroup on “Climate Change, Biodiversity and Sustainable Development”

Policy-makers and stakeholders gathered in the European Parliament to exchange on the upcoming Bee Week 2017 and to engage in a dialogue with beekeepers and on the challenges they face.

Mariya Gabriel MEP and Chair welcomed participants by drawing on the success of the past Bee Weeks and suggested to involve beekeepers from the Mediterranean in the upcoming edition. It was also said that other regions could be included in the coming years. EFSA is this year also actively participating in the organisation.

Pierre Testu, Réseau Biodiversité pour les Abeilles outlined that the European Week of the Bee and Pollination is an event to highlight the importance of bees and pollination for ecosystem services and biodiversity. It brings all stakeholders together in a dialogue to find solutions and to improve the situation for bees across Europe. It was mentioned that the 2016 edition brought together beekeepers and farmers by creating a forum for those who work closely with, and are dependent on bees. The 2017 edition will take place from 26-29 June. It is planned to go on with the same model that has been deemed successful in the past and to continue to work with key partners, also cooperating this year with EFSA. On June 26 the Scientific Symposium is planned to take place in Brussels, which will highlight issues such as pathologies, diseases, environmental factors, and nutrition. The importance of access to information was also stressed underlining the need to be practical and explaining how to best disseminate information that beekeepers might need. A platform will therefore be made available for beekeepers. The example of UK epidemic surveillance networks was raised as it would be useful to develop such networks on a European scale. On June 27 the Beekeepers and Farmers Forum will be organised. It was hoped that this year also beekeepers from the Mediterranean will be involved. The International Conference in the European Parliament will be held on June 28. The main topics to be discussed are: collaborations and solutions, scientific platform, beekeepers and farmers, pollination, indicators, economic collaboration, ecosystem services, and training. The Bee Village will as previous years be set up on the esplanade of the European Parliament. It is planned to have it open for one day engaging with beekeepers and raising the awareness of MEPs, visitors, and the public. The objective is to showcase how important beekeeping is. The organisers have also spoken of an exhibition to be officially inaugurated to showcase the newly forged frameworks of cooperation with the Mediterranean and to exchange with farmers, beekeepers, economic and other stakeholders. It is also aimed to screen the documentary Pollen at the Natural History Museum in Brussels.

Michel Dantin MEP highlighted the need to also include urban beekeeping as more and more cities are carrying out various projects. It was said that this would also raise awareness in a different part of the population. It was also proposed to examine what sort of training is available for beekeeping underlining the importance of young beekeepers having adequate training.

Mariya Gabriel MEP and Chair agreed that urban beekeeping is a point of interest also mentioning that it will be highlighted with a stand at the Bee Village. It was also said that a forum for young beekeepers would be beneficial perhaps with a first event this year and giving it more prominence in the years to come.

Philippe Lecompte, Professional organic beekeeper, Manager of the French Beekeepers Regional Federation of Champagne-Ardenne (FRACA) outlined the situation for beekeeping in France. It was said that honey production as in most countries fluctuates. Globally, honey production doubled in the 1980s in France but has today dropped to be lower than it was in the 1960s. It was said that France today has more bees of high quality yet production has decreased. It was pointed out that the evolution of vegetation correlates to honey production mentioning examples of how sunflower, rape, alfalfa, purple clover, hedges, grasslands  have impacted production. It was stressed that landscapes have lost biodiversity and become more sterile along with the disappearance of forest borders leading to less resources available for bees. It was said that the CAP has ended up favouring agriculture that limits resources for bees in terms of land that is set apart. Another issue raised was pollen resources and the fact that it is unknown how much pollen enters a hive. With regards to honey production it was said that 9000 tonnes were produced in 2016 compared to 35000 in the 1990’s. It was stated that in the past years an exceptionally decline has been observed. The value of honey spiked in 2011 but has since been going though an economic decline. It was informed that France imported 1500 tonnes of honey in 1975 but this has now been multiplied by a factor of 20 (35000 tonnes imported in 2016). The idea in France is that honey does not need to be produced unless they are niche products. Other issues that beekeepers must deal with were raised such as pathologies and diseases (varroa mites, Nosema Ceranae and viruses) and Vespa Velutina. In order to defend bees against pathologies they need a reactive system meaning that they need to have access to nutritional resources.

It was said that when France modified its aid to agriculture, subsidies were based on occupation of space, which has led to practices that modify the outer borders of farming area. It was also stated that borders of forest are also disappearing. It was said that there are some voluntary lands set aside but since the requirement was dropped resources have declined for bees. It was also said that bees must deal with insecticides (neonicotinoids), even if the banning of certain pesticides on certain crops does not mean that production has yet recovered due to many factors, which should be examined. It was said that political decisions often lead to unwanted or secondary effects that could be catastrophic. Moving forward it was said that setting aside land must be reintroduced as it would improve the situation for bees also acknowledging the complexity of the situation. It was said that the beekeeping sector faces many challenges and frustration is building. It was underlined that the service of pollination is provided free of charge by bees when in the US they have started to charge for this service.

Mariya Gabriel MEP and Chair highlighted that consultations on the reform of the CAP have started and to share if there are any proposals to put forward in order to help beekeepers better defend their interests. Philippe Lecompte underlined that the regional reform of France is having repercussions on the organisation of the sector. It was said that it is important to be able to engage with the political sphere on such issues. Further, it was stated that the resources being provided for bees are not adequate nor targeted towards the needs of bees. It was proposed to use agricultural resources and within them provide bees with the nutritional needs required. Further, it was stressed that agriculture will not be productive if beekeeping does not follow suit.

André Frieh, Beekeeper from Alsace outlined that there are 3500 bee farmers in Alsace but 95% are small producers and only 50-60 are professional beekeepers. It was said that the sector in Alsace faces the same problems as described by the previous speaker. Alsace was a wide prairie field with many flowers but has now become a sea of corn fields, which does not attract bees as corn pollen only has 20% of nutritional value. Another issue that beekeepers face are varroa destructors. Further, bees are not producing enough honey. Investments are put into nourishing syrup that without the hives would not survive. The importance of urban beekeeping was reiterated underlining the need to study this further to see what opportunities it might hold for bees. It was said that there are around 20-25 beekeeping schools but it is unfortunately difficult in France to receive training particularly for small beekeepers. In Alsace it was said that they are suffering from a lack of blossoms. In the fall there is not enough pollen available for bees to weather out the winter. It was informed that he feeds his bees pollen that has been frozen from previous years. Further, Mr Frieh works closely with the departmental council and participates in the establishment of areas set aside. It was noted that where there are flowers the bees are doing ok. It was concluded by underlining the growing phenomenon of taking hives to where flowers have been planted in the fall as their survival rate seems to increase.

Mariya Gabriel MEP and Chair underlined that exchanges among beekeepers are crucial as it is pivotal to have an idea of what is going on in different regions and countries. It was said that mobile beekeeping is becoming heard of more and more. Philippe Lecompte reiterated that this phenomenon has required investment in order to ensure that hives are mobile, which implies a high concentration of bees in several areas leading to unsanitary conditions and spread of disease. It was also underlined that wild bees are put in competition with domestic bees over resources. It was stressed that focus must be on border areas in the outskirts of agricultural areas as this is where resources can be created necessary to feed wild and domestic bees. The issue of reproduction of queen bees and the difficulties this entails was alos raised by André Frieh.

Mariya Gabriel MEP and Chair concluded the meeting by stressing the need to continue to raise awareness by popularising these challenges in order to bring about positive change.